Mahatma Gandhi – lovingly known as Bapu by all Indians is internationally acknowledged for his doctrine of non-violence that led to India to its glorious freedom. The story of his life has impacted humanity to its core.

A speech with Gandhian quotes and messages, a special dance on the relevant theme , quotes and the young learners of Grade I with banners and Gandhi’s message brought the gathering to understand more about this iconic leader.

A skit on Gandhi ‘s
#threewisemonkeys was presented by students in the most eloquent manner.

All our Students were imbued with Gandhian values and thoughts and vowed to became better citizens of India and this World. 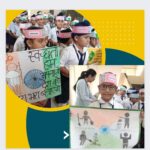